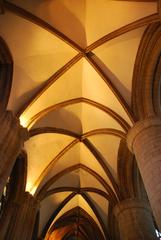 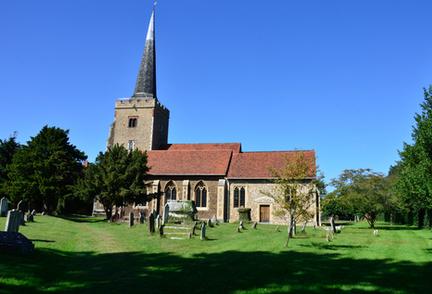 ​​THREE OF THE BEST

Having concluded our tour of all things wooden within and without an ancient church, let’s take a look at three churches from different eras where woodwork reigns supreme.

The epitome of the small and isolated rural Norman church, the now redundant Winterborne Tomson in Dorset stands alone in a farmyard. A hundred years ago it was in a wretched, neglected condition but the sale of some of Thomas Hardy’s manuscripts made funds available for church repair in Dorset. The Secretary of SPAB (Society for the Protection of Ancient Buildings) was instrumental in ensuring that this little church was brought back to life in 1932.

How the great writer (who was originally a church architect) would appreciate the charm of the interior with its complete set of Georgian fittings. Box pews, a gallery, pulpit, screen and altar rails are now bleached to a magical silvery grey - a delight in contrast to the whitewashed walls. The wagon roof of traditional west country design is unusual in extending over the curved apse.

Gatton in Surrey lies within the grounds of a school close to the Pilgrims Way north of Reigate. Its tranquil setting is ironic for a place once notorious for being the third most rotten borough in England – with two MPs for a population of 23 people!

Restoration in the 1830s created a rich furnished interior – practically a museum of wood - reminiscent of an Oxbridge college chapel. Though no such chapel has such an impressive family pew, complete with a fireplace and padded benches.

Lord Monson brought rich mahogany woodwork from the continent: altar rails, pulpit and communion table. The Flemish items include carved stalls from Ghent and a canopy from Louvain. The 15th century screen is English from another unknown church.

And for domestic wooden fittings, go into the heart of the City for a little known treasure a short walk from Liverpool Street Station. Bevis Marks is the oldest synagogue in use on British soil. Built in 1701 by Sephardic (Spanish and Portuguese) Jews, it marked their return to England (at Cromwell’s invitation) after an interval of 350 years.

The interior has the simple plan of a dissenters’ chapel but retains all its original woodwork of dark oak and mahogany - of outstanding quality. Beautiful and impressive are the ladies’ gallery, benches, reader’s desk - and the wooden ark or cupboard to hold the sacred scrolls of the Pentateuch.

Your own floors may be of humbler stock but still deserve your care and attention.

Show them respect with the help of Floor Sanding!