Once inside a church, you can focus attention on all the fascinating bits and pieces that go to make up the liturgical requirements: the fittings. And so many are made of wood!

Before the 15th century, the poor attender at mass was forced to stand (though there was more flexibility about people coming and going). The old and infirm were allowed to lean against a raised stone bench around the walls – hence the term ‘the weakest go to the wall..’.

Medieval wooden pews frequently appear as individual survivors (with others sometimes chopped up to create screens and tables). Complete sets of benches are always a very satisfying sight, not least from their great diversity of craftsmanship. They often bear outlandish decoration of animals - but also ships, windmills and tools.

Many bench ends have poppy heads - named after the figurehead of a ship - as at Blythburgh in Suffolk with its famous set of carvings devoted to the seven deadly sins. East Anglia is rich in such decorated benches, often with delicate tracery.  Among the best are those contained within the adjacent Wiggenhall churches of the Norfolk fens - St Germans and St Mary the Virgin.

Affpuddle in Dorset (the village next to the home of the Martyrs) may well be unique in that we know who designed and carved its benches. As the inscription proclaims: ‘mayd in the yere of our Lord God 1548, the tyme of Thomas Lillington, vicar of this church’.

For a remarkable 18th century “childrens’ pew”, the wonderful unspoilt church of Kedington in west Suffolk is well worth a visit.

Changes in liturgy as preaching moved towards the middle of the church led to the development of the box pew during the 18th century: providing a degree of comfort and privacy in an age of the interminable sermon. Although many were ruthlessly cleared away during Victorian restorations, there are some splendid complete survivors. At Whitby, the pale pews appear so jammed into the church that it is difficult to make out the form of the interior.

Some box pews retain their numbering, a reminder of how payment by class distinction determined who was allowed to sit in the more favoured positions. A number of free pews were kept at the rear of the church, as can still be seen at Gittisham in south Devon.

There are few more nostalgic feelings than to be transported back to the 18th century by sitting in a pew in a Georgian church. As in the unchanged gem at Avington near Winchester. Built in 1768, its rich pews of Spanish mahogany (reputedly from a galleon), include the ‘squire’s pew’ with its pegs for wigs - big enough to house the subsequent Sunday school.

As for the wooden floorboards in your own home or business, make sure they continue to combine practical use with lasting beauty...

Call on the experts! 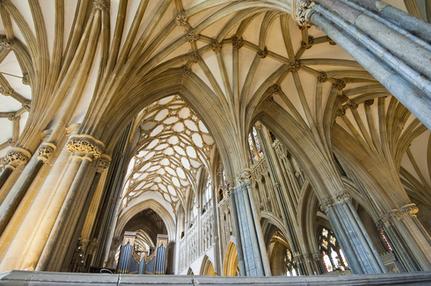