In today’s sophisticated world, it’s difficult to imagine a less exciting or romantic building than a barn. Yet the popularity for their conversion into habitable dwellings shows their potential.  Indeed, a handful of surviving medieval examples are splendid demonstrations of the skill inherent in their construction and the carpenter’s craft.

Lying in the shadow of Heathrow airport, the village of Harmondsworth provides a surprising - yet welcome - taste of the rustic atmosphere of old Middlesex. Its great tithe barn dates from 1400 - a stunning 190 feet long with an impressive interior dominated by tie beams supporting king posts.  After years of neglect, it has recently been restored by English Heritage and is open during the summer.

Such barns were once common throughout England, being the repository of the annual tithes i.e. ten percent of the harvest that was exacted by the Church as payment from its tenant farmers.

Head east to the heart of Essex south of Braintree and the two barns at Cressing are worthy of attention as much for their history as their durable construction. They form part of an extensive Temple complex - the first English settlement outside London of the Knights Templar. This somewhat mysterious military and religious brotherhood held sway for two hundred years - introducing banking to Europe among its lasting achievements - until its ruthless suppression by the pope in 1312.

The two barns are a reminder of the immense wealth the Templars accumulated through agriculture and trade. Of outstanding construction - robust and aisled with tie beams - they both enjoy the dimensions of a cathedral.

The barley barn dates from the first part of the 13th century and was made from 480 oak trees. Its weatherboarded exterior is 110 feet long. The larger wheat barn is fifty years younger, 140 feet long - and constructed of brick and timber.

But surpassing these three fine examples is possibly the best of all: the aptly named Great Barn at Great Coxwell near Faringdon in Oxfordshire. Breathtaking in its scope and setting, this tithe barn is one of the country’s finest buildings.

Built by Cistercian monks from Waverley Abbey on land provided by King John (so he did at least one generous thing..), the barn is in the shape of a cross -150 feet long and fifty feet high. With its stone and tiled roof, the porch, east and west doors are original, with massive oak beams and posts holding up the structure within.

Wood certainly endures – when looked after. Your own wooden floors most probably lie in more conventional property, converted or original. 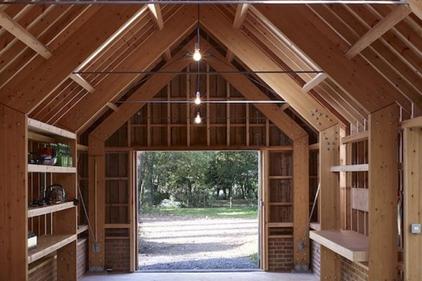