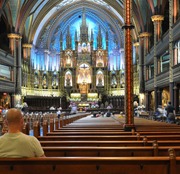 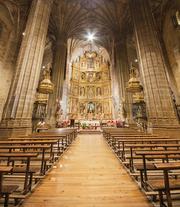 We expect to see the altar in its traditional position at the east end of a church – yet by the early 17th century, the Puritans wanted to move it towards the centre.

In 1635, the traditionalist Archbishop Thomas Laud therefore ordered the erection of wooden altar rails – east, west and south – to preserve its position.  Their narrow columns also served to prevent the entry of dogs: clearly standards had been slipping with animals being allowed to roam freely..

Such ‘Laudian’ rails were hated by the Puritans and many were destroyed during the Civil War and the Commonwealth. A few still survive, however, such as those within the interesting church of Staunton Harold in Leicestershire - now owned by the National Trust and hardly changed since its building in 1653.

Only a handful of churches date from this brief but significant time in our history, but its builder, Sir Robert Shirley, owner of the adjacent manor house, paid a terrible price for his piety.

Having so obviously demonstrated that he was a man of means, he refused to supply Cromwell with money to raise a troop of soldiers and was thrown into the Tower - to die there a few years later.

Poor Laud had also made so many enemies that he had lost his head on the block in 1645 - paying the penalty for being out of step with the times for his loyalty to the King.

Rails of the Georgian and Victorian periods usually extend from wall to wall.  They are an attractive wooden feature in many churches, especially when they have narrow twisted columns.

Another wooden feature sometimes seen in an old church is the Ten Commandments inscribed on boards.

Queen Elizabeth 1 made a decree in 1560 for the Commandments to be on display in every church, usually on the chancel arch in full view of the congregation.Today, such boards exist from subsequent periods, such as inside the charming 18th century church at Petersham on the Surrey bank of the Thames. On wooden boards behind the altar are proclaimed the Commandments, the Creed and the Lord’s Prayer.

In the rear corners of the chancel, one may occasionally see a wooden door protecting a small oblong recess in the wall. This is an aumbry - a cupboard once used to store the church plate - the altar vessels of chalice, paten and pyx. Not surprisingly, this is by no means secure enough nowadays.  These precious surviving silver items are either kept in the vicarage or rectory – or on display in the County Museum!

Your own wooden floors may be in no danger of theft – but deserve due care and attention. Keep them looking good with Floor Sanding ! 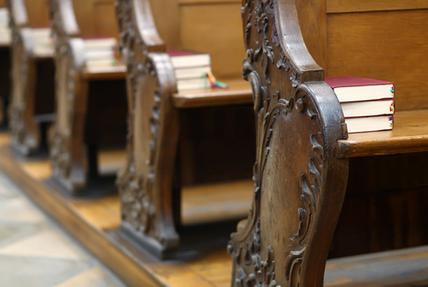