SAILS IN THE LANDSCAPE

At one time, a windmill was as ubiquitous an English rural feature as the parish church, with up to 10,000 working throughout the country. Now a rare sight, windmills are most common in flat and windy East Anglia, though survivors exist in such unlikely places as Brixton and Upminster. A few have been converted into dwellings but a mere fifty are still working and grinding corn.

Yet they provide so much simple satisfaction: an ornament in the landscape; a relic of pre-industrial England and a quaint reminder that functionality does not preclude beauty. In this era of low energy and carbon footprints, what could be greener than a wind-powered static machine?

For the timber lover, they are a symbol of the durability of wood and, with their intricate mass of moving parts, an engineering marvel testifying to the construction skills of our forebears.

There are two main types. The earliest is the wooden postmill, which has its operating machinery within a box-like body (or buck) resting on a massive upright oaken post. This whole structure turns on the post to enable the sails to face the wind. Such mills came to a technical peak in Suffolk in the 19th century.

These were cumbersome and sometimes dangerous to operate manually - so the fantail was invented in 1745. This is an automatic device: when the wind changes, it starts to whirl and helps to drive the buck into the right position.

A tower mill was later developed with a rigid body (of brick or stone) to contain the machinery, while the sails were attached to a rotating cap atop the tower. A smock mill is a variant on this with its body (usually weatherboarded) in a polygonal shape – reminiscent of a countryman’s smock.

The most famous English windmills are probably the Clayton ‘twins’ on the south downs north of Brighton. Jack is a tower mill while Jill is a working post mill lovingly restored and maintained by enthusiastic volunteers.

Given the propensity of water to penetrate and rot the timbers, the oldest working windmill at Outwood near Reigate in Surrey deserves our admiration.This is a grand postmill of 1665 - demure and domestic.

One of the most impressive postmills of all is at Great Chishall on the ‘heights’ of the Cambs/Essex border. The white-boarded elegance of its regal and beautiful construction can be enjoyed from afar - and now inspected within, since it was taken into ownership and restored by a local trust.

Of course, sanding the floor of such a working building would be an indulgence too far. Flour dust acts as a useful cover. For the floors in your home or office, you need more conventional remedies.

Call on Floor Sanding to arrange a transformation and prolonged life! 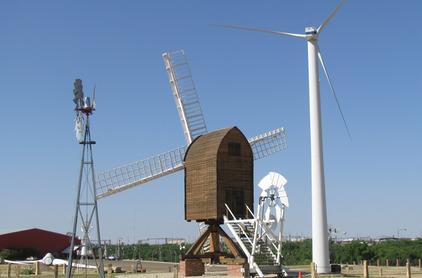