A floor is a simple enough thing: a surface on which to stand, walk, place furniture..   preferably kept warm and dry. On that level, a cave was a good enough start, with people eventually moving on to mud floors covered in rushes. These also served to soak up animal waste - a common sight when medieval dwellings were often shared with the family goats, sheep and pigs.

Even today, a country such as India - despite its recent economic progress - probably still has a majority of its rural citizens padding around barefoot on the dried mud and cow dung floors in their dwellings. A cool welcome in summer!

With the first floor boards, a logical development from wooden walls and ceilings, the next step was an attempt at preserving the timber - a process of trial and error as substances were applied and soaked into the wood.
In Britain, the growth of the navy prompted the use of tar and pitch. As the Industrial revolution gained apace, there was a growing need to preserve mass-produced items such as railway sleepers and telegraph poles. Creosote was developed 150 years ago: originally a wood distillate, it’s now derived from coal tar.

Resins are plant or animal products that dry on exposure to air (such as those shiny lumps on the bark of cherry trees). Their practical uses date back to the Egyptians. What we know as ‘varnish’ is a product made from natural resin combined with a solvent such as alcohol.
Shellac is an interesting product from the resin of the lac bug of India and Indonesia (so many of them occur on each tree that the Sanskrit lakh means a hundred thousand).

This is scraped off in flakes or lumps, dissolved in alcohol and used as a hard, shiny wood coating.  Its most famous use was in the 78s of early records. Even today, shellac has many uses from nail lacquer and lemon ‘wax’ to fireworks and pill coatings.

The development of synthetic lacquers in the 1920s proved the death knell for shellac on floors - though it’s still valuable in french polishing. Vinyls made the old 78s obsolete in the 1950s.

The old black varnish in older properties still poses a challenge for today’s sanding machines – yet the choice of natural or synthetic floor products is wider than ever.

You’ve no reason not to enjoy a new, bright, long-lasting finish... 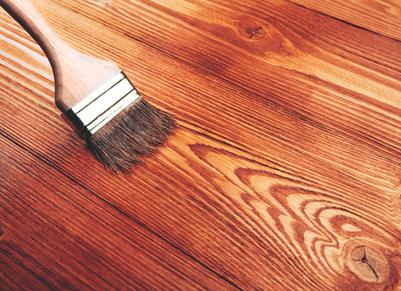