The chancel – the area at the east end of a church where the high altar is located – was traditionally reserved for the clergy, who were responsible for its upkeep. Stalls are similar to the benches in the nave – with some having traceried panels and poppyheads. They were originally used by the priest, his assistants and leading churchfolk – and not occupied by choristers until the 19th century.

In our greater churches and cathedrals, the stalls can be of elaborate design with tabernacled canopies, as at Lancaster and Beverley Minster.  Cartmel Priory in Lancs has choir stalls of 1450 with superb oak canopies carved in 1620 – including pillars decorated with grapes.

Long medieval monastic services, especially in the early hours, were a challenge for even the young and fit. An older monk would appreciate the relief provided by a misericord, a tip-up seat with a ridge which allowed him some support while leaning back and resting his arms on the arms of the stalls.

Many examples still exist and can be among the most amusing and instructive items in a church: some symbolic, others depicting everyday medieval life. They are not only beautifully carved but have intricate details, as in the fireside scene with two sides of bacon at Ludlow; a mermaid with two tails at Cartmel; a pedagogue birching a boy (with three other boys with monkey-like faces laughing alongside) in Sherborne Abbey.

There is a splendid collection of misericords in Beverley (in the Minster and St Mary’s) while Lincoln Cathedral enjoys a grand total of 108.

The altar was a mensa - a tablet of stone until after the reformation when orders were made for wooden communion tables ‘decently made’. Many survive from the 16th and succeeding centuries. As they are usually covered by linen frontals, however, sometimes the only view is of a carved bulbous leg.

Behind the altar, the reredos is usually of stone but medieval wooden examples consisting of painted carved panels can be quite spectacular.

Romsey Abbey has Italian-style oil paintings of saints on the reredos in one of its chapels. While in Sherborne, the little chapel within the 15th century Almshouse of St John has a rare treasure: a glorious painted Flemish triptych.

Medieval chairs are also still occasionally seen in our churches: gratifying for such an easily stolen item. So forgive me for not mentioning any specific examples here...

Whatever furniture you enjoy at home, don’t allow it to rest on a wooden floor below standard.

For repairs or restoration – you know who to contact! 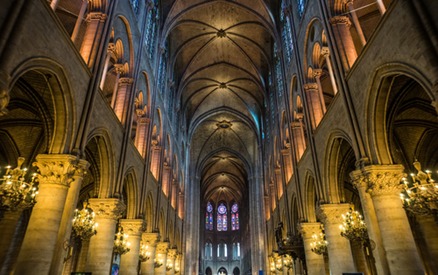