HANGING IN THE AIR

A staircase has the potential to be far more than a functional structure. It can act as a focal point – and a feature of beauty in its own right. Could you make more of your own set of steps and banisters?  For inspiration, here a few breathtaking examples from the past 400 years:

Avington Park near Winchester in Hampshire was adapted as a lodging house for royalty in the late 1600s (after the Winchester cathedral clergy refused hospitality towards Nell Gwynne).

This Mecca for high living was enlarged by the Dukes of Chandos in the 18th century.  Although its star waned during the 1900s (to be bought by the poet Shelley’s younger brother) surviving features include the great hall and a magnificent staircase that bears a Greek honeysuckle motif.

Godington Park near Ashford in Kent was remodelled by Captain Nicholas Toke in the 1600s (who married five times in a failed attempt to secure a male heir). It is full of splendidly detailed woodwork, including the staircase with its impressive carved figures.

Kingston Lisle Park near Wantage in Oxon (often visited by Princess Diana and her boys) is an Italian palace within a country house - full of superb craftsmanship as demonstrated by classical figures, antique glass and chandelier. The wonderful flying staircase looks as though it is suspended in mid air. As it curls up out of sight with no pillars for support, an even bigger mystery is the unknown genius behind its design.

Woburn Abbey has more than enough interest inside the house to compete with the wildlife on display in the park. The Grand Staircase of 1747 by Henry Flitcroft is another creation that appears to have no visible means of support.  The white steps of its beauty are enhanced by the clever perspective from the way it narrows towards the top to a single stairway.

And to venture a little further afield - the city of Porto in Portugal has a notable Art Nouveau style bookshop of 1906. Enter the Livraria Lello and be dazzled by the wooden panels and carvings – with the centrepiece of the noble staircase with its glossy red steps and glorious wooden banisters.

You may not aspire to such splendours in your own property – but in home or office, your staircase does not have to lead a coy existence under layers of carpets or paint.  With a refurbishment of stripping and staining, the results can be remarkable and a worthwhile investment.

And who to advise you on such a job? And carry it out to perfection?

Floor Sanding  are on hand for your call! 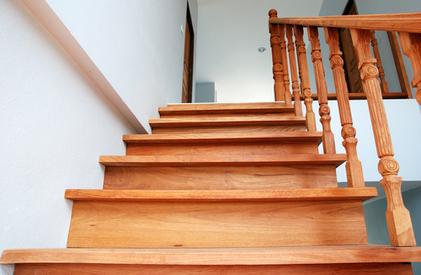