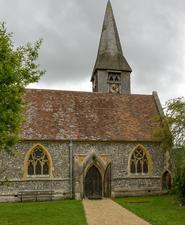 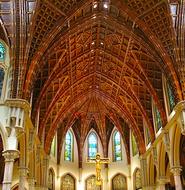 If one thing exemplifies the English countryside, it is the tower or spire of the parish church – down in the valley, on the hill, in the centre of the village or isolated among the fields. And despite the onward march of modernisation, around ten thousand of these buildings have survived from medieval times.


Many are successors to earlier buildings on the same site. The Saxon originals were built of wood, a material susceptible to fire, rot or deliberate destruction. Hence no old wooden church exists in its entirety. Wooden features are another matter.  Inside and out, timber has both structural and decorative value - as well as contributing to the mode of worship in the form of pews, pulpits and lecterns.

The way into the churchyard is often via the lych gate. Lych means corpse and this was where the body would be placed for the first part of the funeral service. Most lych gates are modern (with some being built to commemorate the local dead in the Great War). A few survive from before the reformation.  Anstey in Herts, for example, has a fine example from the 15th century.

The most common entrance is by a south door, often protected by a porch: an important venue in medieval times, for both legal business and the conducting of the first part of the ceremonies of marriage and baptism.

Medieval wooden porches are fairly common, especially in the Home Counties, where good building stone was not available but timber was abundant. Good examples include the 15th century porch in the now redundant church at Stanstead Abbots in Hertfordshire.

Wooden towers are common in mid Essex, in such churches as Shenfield, Greensted (still with its Saxon oak timbers in the nave) and possibly the finest of them all at Blackmore.

Some churches in Surrey, Kent and Sussex have a little timber belfry surmounted by a shingled spire. When contrasted in black and white, they make a very attractive sight, as at the two delightful small Norman churches at Ford and Tortington, both near Arundel in West Sussex.

But sometimes the bells don’t enjoy the protection of a tower, as in the unique example of East Bergholt in the ‘Constable Country’ of Suffolk. The bells are rung by hand at ground level – in an oak cage that has stood since the 1530s. Amazingly, these are the heaviest peal of five in the world.

If such an ancient (and temporary – to make do for a tower that was never completed) structure can brave the elements, your own wooden floors must lie in a privileged position. They still need looking after and may eventually require repair and decoration. Call Floor Sanding for the best ways to do this! 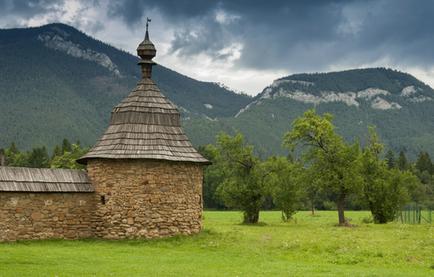