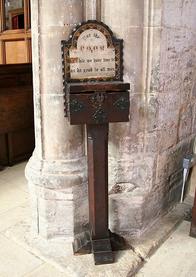 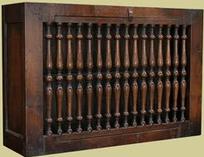 Among the joys of entering an old church is to come across quirky pieces of medieval wooden craftsmanship. Today’s visitors are encouraged to make donations towards maintaining the fabric of the building. Our forebears in their congregations were asked to contribute towards the relief of the poor.

A few pre-reformation poor boxes survive – such as the tall, three panelled example at Blythburgh in Suffolk. The wooden box at Steeple Bumpstead in Essex dates from 1500, is iron bound with three locks and rests on a panelled stem - covered in interesting graffiti.

After the dissolution of the monasteries, poor relief increasingly became viewed as a Christian duty during the late 16th and early 17th centuries. That great church at Walpole St Peter in Norfolk has a box dated 1639 inscribed with ‘remember the poor’.

Old chests are a far more common sight: they were used for the safe keeping of important church documents, altar covers and valuable church plate. The earliest were crude ‘dugouts’ hewn out of a single log, while later versions were constructed from oak panels, sometimes with legs, as at Stoke d’Abernon in Surrey.

For security, a chest would have at least three locks, whose keys were retained by the vicar and the two churchwardens. Warbleton in East Sussex is bound by eleven iron bands and secured by seven padlocks. Some chests retain iron lifting rings at each end for use with a rope or chain attached to a pole.

The most impressive chest of all is possibly at Newport in Essex. This 13th century affair with five locks is in effect a portable altar - including a false bottom to store the altar slab. The lid is raised to reveal five panels filled with beautiful paintings of saints and the crucifixion: the earliest surviving examples of English oil painting and a surprising work of art to be housed in this large church beside the old Cambridge road.

Alms boards dating from the 18th century onwards are a fairly frequent sight. They detail bequests to the poor and needy in the parish, though the few shillings bestowed for education and widows don’t go very far nowadays.

Much rarer are dole cupboards where surplus bread was placed for the poor. Examples still exist in St Albans Cathedral and Milton Ernest, Beds. Ruislip in Middlesex has a splendid example of 1697 with four shelves and beautiful carvings.

You are unlikely to receive a parish subsidy for your own wooden floors but keeping them in good condition is a worthwhile investment.

Find out how from Floor Sanding !

“ When I ripped up my discoloured carpets which were, frankly, very old, I was shocked at what my floorboards were like. Although I have lived in my home for over twenty years, I had never seen my floorboards before. Not only did they have a variety of colours, but there were many gaps in between as well, and the amount of dust and dirt was frightening! As I suffer from asthma, this was a real worry for me as dust tends to trigger quite a nasty attack. When I explained to Andrew and his team about my concerns and the work that I wanted him to do, he reassured me that he could do this work without any problem. When he arrived at my home, he was very courteous and kept my home very neat and tidy. And the end result? My floorboards look as good as they have ever been, the dust is gone and my asthma seems to have improved too!” 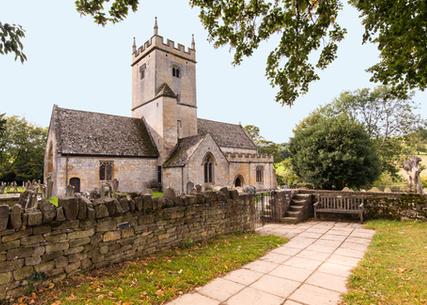