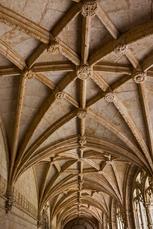 So what else may a visitor occasionally see among the cornucopia of wooden creations inside an ancient church?

Monuments in stone are very common, but only around 80 medieval wooden effigies have survived. The single example in Sussex can be found at Slindon near Arundel, with the grand 16th century oak carving of Anthony St Leger.  His body is clothed in the plate armour of the Wars of the Roses, while his head rests upon his helmet.

For glorious dark woodwork in general - pews, pulpits and wall panels - Wren’s City of London churches are rich hunting grounds. None offers more of a surprise than within St Mary Abchurch, just opposite Cannon St Station.

It has a plain red brick exterior, but go inside and be transfixed by the beautiful interior: a square full of carved woodwork, including a font cover, gallery and door cases.

Although the church was bombed six times during WW2, all the woodwork was saved and restored, including the original steps to the pulpit and the extremely rare dog kennels under the churchwardens’ pews.

The centrepiece is the magnificent altar: a work by that prince of woodcarvers, the great Grinling Gibbons, noted for his realistic representations of leaves, fruit and flowers. No attribution here: his letter of 1689 asking for payment for the work provides the proof.

Wooden funeral biers often survive. The well-preserved example at Folke in Dorset from the early 1900s looks ready to be pressed into service at a moment’s notice.

Early fire engines were often kept in the parish church. Good examples exist at Sandwich in Kent and Hook Norton (Oxon). St Saviour’s at Dartmouth in Devon has one in the tower.

Many churches are proud of their organs but the only pre-reformation wooden case is in mid Wales isolation at old Radnor.

As a reminder of the more summary justice meted out by our forebears, a ducking stool (to cool off nagging women) survives in Leominster church in Herefordshire.

Stocks in or just outside churchyards are rather more common, as at North Cheriton, Somerset and Brent Pelham, Herts. Little Easton in Essex (a church filled with outstanding fittings, paintings and sculpture) has a set with an attached whipping post.

As for your own wooden floors, they evoke no such negative connotations - only the virtues of practicality and beauty.

Keep them in good heart and looking good with the help of Floor Sanding!